A youth in his late twenties wielding incredible power.

Matthew is in his mid twenties. He usually favors preppy clothing, collars and button down shirts as well as slacks. While “out on business” he has a grungy pair of shoes or two, some “faded” t shirts that came from hot topic, as well as a beaten duster he found at salvation army.
in addition he has a spell lo grow about two days stubble when he goes out. After all no one takes urban wizards seriously unless they look like they have better things to do with their time.

Powers
Matthew is magical based his main attacks are his faux blackthorn walking stick as well as Thor’s Lightning. He also has a background in Irish Martial Arts which he’s had a lot of time to pratice. He’s very proud of his Karmic shield that he developed. In addition he has a vast store of arcane lore and spells saved for a rainy day, or a sunny day should he need rain.

Matthew’s biggest resource is the Library of Merlin, which is open but putting a magical key into any door. He carries that key on him at all times. He also has his faux blackthorn walking stick. Those come form someone in Germantown who he saved from trans dimensional aliens once. Aside from that he has the many friends he made in his world travels as well as in Hamilton.

February 1st, 2000
I turned 13 today my Dad bought me this journal for my birthday, lame. He mumbled something about building character so I’m writing in it today.

March 13th, 2003
I started Féinchosaint today. It’s an old Irish self defense technique it’s sort of like Irish karate. Anyway classes are cheap and it looks like fun.
…

May 1st, 2008
Today my life got weird. I get a call from my parents saying there is a family emergency, so I rush home, where I discover that there is some old guy sitting with my parents. He says I have some grand destiny to be the guardian of the world.

May 2nd, 2008,
The old guy is named Ryley he explained things so here goes. Many years ago Merlin helped found the Knights of the Round Table. When he got old he passed the name to an undocumented son. Apparently the old guy was something of a horn dog, leaving lots of offspring. Each of them as a fraction of Merlin’s blood so can access his powers. Normally this was passed down through family lines but being the magical defender of the earth leads to people in body bags. This has happened before and Thomas selects someone from a list of available candidates. I’m told I’m the 23rd time this has happened. Ryley says I need to quit school and come with him to learn to use my powers. So I can learn magic.

June 5th, 2008
I meet Mary today, she works with Ryley and is part of a coven near here. She’s nice. Ryley is just weird. I think he’s been living alone too long.

.
December 10th, 2008
What the f*ck, Ryley says “my learning” hasn’t progressed enough to visit my family. He says I need more training and control. He says in 100 years I won’t even be able to remember this Christmas. F*ck him.

December 11th, 2008
Holy Sh*t I almost killed Ryley today. We were fighting about visiting my family and I got so angry I just let loose a blast of magical energy. There was fire and brimstone and he was almost fried. Actually I thought he was. Mary cam later and tended to him. He’ll live however he won’t be up for teaching me. Mary suggested a journey, kinda like a walkabout or vision quest. See the world and find my place in it. I’ll leave after I finish packing.

March 3rd, 2009
I’m in Bucharest I think, my brain is fuzzy after the Absinth, flaming drinks may be off the list. Some chick rolled me too got my wallet f*ck. I found some of the b*tiches hair. Lets not record where for prosperity. Anyway I can use that to track her and get my stuff back. That’s after I recover.

March 7th, 2009
Werewolfs are real. Fortunately not fireproof. I’ve never written about that have I. Well it’s called hellfire. It uses my own anger rage and sin as fuel. Then it burns the soul of whoever is annoying me at the time. Not not annoying it’s powerful and more than a little terrible. I feel empty and cold after using it, like it’s burning my own soul too. I’m thinking Italy maybe someone in the Vatican can help with this issue.

April 8th, 2009
forget magical knight the earth needs help, at least humanity. I saw two guys try to mug a grandmother today. I dissuaded them with my Shillelagh, I’m glad I kept that up.

April 10th, 2009
OK Peter has taught me some prayers and stuff. That should help me keep the fires of hell at bay for a bit. I feel calmer now, maybe time to move on.

July 15th, 2009
Cool, I traded a recipe for a flying ointment to a yogi for some info about how to manipulate Karma. It’s kinda neat the energy is directed differently using monition and breathing it could be useful.

October, 20th 2009
This is cool. I figured something out. It may even be a new magical invention. That Karma stuff I leaned back in India combined with this Tia-chi stuff I think I can redirect attacks. The basic idea is that as someone attacks me I redirect their attack away from me back to them like Tia-chi, so I’m uninjured, but instead of throwing it directly back at them I put in in their Karma so they will be injured indirectly. This is so cool.

(What follows is a series of diagram and magical writing)

November 5th, 2009
I finally got it working. It was harder than I thought I wound up making some gauntlets to help me until I perfect the trick. The monks didn’t approve saying mastery of self was paramount. I’ll try I promised. Anyway I’ve been here too long and I need to keep moving.

November 30th, 2009
Today I learned, snow can really suck, bears can talk, and hot toddies are good. I was caught in a freak snowstorm somewhere in Chukotka. Fortunately a bear found me. I’m going to write that again, a bear found me. His name is Boris, nice guy we bought each other a-few rounds and hung out in this inn he knows. He told me how to find it but I’m not allowed to write it down, but it’s OK I’m sure I’ll remember. Anyway it’s cool there’s a centaur and people from the past future oh and a frog. Though he hates being called Kermit. Anyway as the Russians say Достаточно vodka может заставить человека принять много вещей.

December 1st, 2009
I woke up Lavrentiya, and yep I forgot how to get to the inn. I remember something about memory being state dependent maybe if I get tanked again I can remember how to get there.

December 5th, 2009
I talked the captain of the Drunken Albatross to let me be a ship hand as he goes to Alaska. I just looked at the date. I think I can get home for Christmas this year.

December 24th, 2009
I made it home, it was tight but I did it. Through a combination of Faery Paths, cabs, and hitching. I may need to double check my passport, I think it’s missing my return to the US.

January 15th 2010,
Viking’s don’t like Mormons, I still don’t get it but there ya go. Anyway the bike my parents got me turned out well. I wonder if I can get it across the ocean easily. At any rate this gang I’ve been traveling with seems cool. The Wolf pack unoriginal name.

January 17th 2010
Mormons hate vikings, we were attacked by some. Last time I saw magic like that I was at the Vatican.. Anyway glad I can hold my own because that was rough. Bob Thorson, he’s some sort of cunning folk. I’ve been trying to talk it but he’s not having any part of it. After the rumble he asks my why don’ I use my full power. I stammered for a moment, it’s bee over a year since I used my hellfire and with the attack bringing back memories of it I kinda froze early one. Then he pulls me aside says I’ve “bleed with them and that makes me one of em”. So he teaches me how to call lightning, so I don’t “kill my fool ass before I come into my power”.

January 24th 2010,
I left the wolf pack, it was sad I really liked them. However it was time to move on.

February 13th, 2010
I have no idea what these backwater swamp folk are speaking but it will not help you get laid in Paris that much I can tell you.

March 16th 2010,
I couldn’t take the bike. I left it with my parents for safekeeping. I’m headed back to Whales where I hope to meet up with Mary again.

March 17th 2010
Bummer Mary is gone off to deal with some negotiations or something. I heard someone mention once every seven years. I’m sure I should know the significance of that I’ll sort it out later.

Match 18th 2010
Ryley came to see me. I was nervous I mean after all I did try to kill him a year ago. He seemed unfazed by it but he was eager to hear what I had been up to. I showed him some of my journals and we talked then he gave me something, a key. He told me it would work on any door and boy did it. It’s the key to Merlin Library, the collected writings of all the Merlin’s through the years as well as some random esoterica. We added my journals to the collection.
April 2nd 2010,
I’m going back to school. It’s been nice but I think it’s time to settle back down into a life. Fairmont College in Hamilton Delaware seems to have a good psyche program. Besides How weird could Delaware be?

August 3rd 2010,
I’m back in school now. Settling in, I have this mystique as slightly older and a world traveler. The student body looks good.

August 7th 2010,
Delaware is very weird, there’s more going on here that I thought possible, and I’ve sipped fay wine with changing wino’s for god’s sake. At any rate I need to get into this city fast or it may eat me.

January 6th 2011,
I banished a lesser succubus today. Turns out there was a brothel of them in Annex. That was fun. This is the last line though. Right now Hamilton is where I am. I will not let these demons suck the life blood of people while I have the power and will to help.

February 1st 2011,
I was born Matthew Shanks I am The Merlin. Hamilton for now at least is my city. I will protect it. 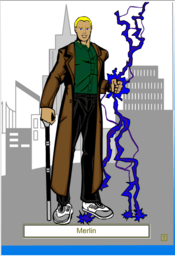