Determination (Fate points; 6 minus no. of powers; gave one to party pool): 4

History: In 1938, archaeologist Dirk Cullen, aided by the alluring Miss Ling and plucky Takeo, helped several families flee turmoil in China. Among the handful of items they took with them was the legendary Jade Bow , said to be a gift from the gods. The refugees and artifact arrived in Bay City, Oregon, where they stayed for several decades.

Sometime later, a gang stole the bow and brought it to Empire City in New York, where a rookie police officer found it. As “Toxaris the Sniper,” Robyn Fitzwalter fought crime and supervillains until her untimely demise at the hands of the Cremator.

The great bow, broken and forgotten, passed to Fitzwalter’s partner Jim Marx, who later moved to Hamilton, Delaware. Recently, Kyle Martins, a college student and fan of Toxaris’ exploits, obtained the relic’s remains and vowed to carry on Fitzwalter’s fight for justice.

After several months of study and experimentation, Martins has placed pieces of the Jade Bow and its silvery strings into two folding crossbows mounted on vambraces that fit under his voluminous opera cape. As “The Cloaked Quarrel,” this latter-day man of mystery has honed his body and mind and wields his mystical weapons in a never-ending struggle. He is exited to learn that he is not alone.

Since then, he helped DarkStorm create a base of operations in an abandoned subway station, started dating Rain Tomotowa, and helped establish “the Eighth Legion.” Kyle still hopes to impress and join the ranks of established superheroes.

Personality: Kyle is optimistic and idealistic, but he is well aware of the dangers that a “normal” human faces against criminals, let alone supervillains. The Cloaked Quarrel wants to fulfill his destiny, preferably with other heroes, but he has had to work in solitude so far.

Abilities & Resources: Kyle appears to be a normal human male of average height and build for someone who regularly participates in moderate physical activity. The twenty-something college student has black spiky hair and a goatee and wears casual clothes.

Other than his mystical twin crossbows, Kyle has a range of exercise equipment, computer and communications gear, and textbooks in his modest apartment in a transitional neighborhood. The mystical weapons can fire bolts that carry an electrostatic charge that can entangle or stun.

The Cloaked Quarrel’s costume consists of a dark frock coat, customized leather bracers, a bandana, and polarized glasses/infrared, telescoping goggles. He still needs to get more climbing and stealth gear, as well as proper body armor. Thanks to DarkStorm, he also now has a red 2004 C6 Corvette and access to the base of operations. 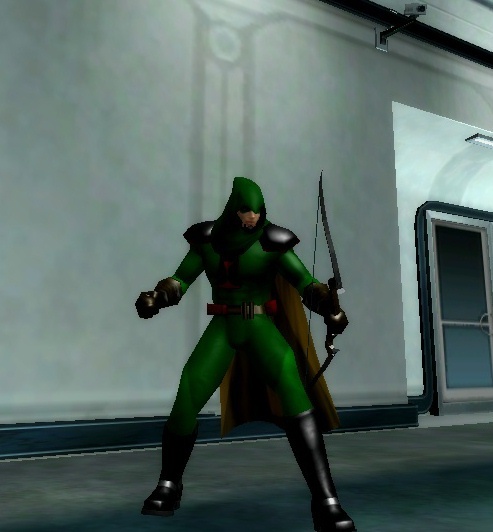