“Hamliton, Delaware, 28 to 29 January 2014:” After preventing a prison breakout and fighting supervillains working for a mysterious new mastermind, members of the Eighth Legion regrouped at their secret subway base. 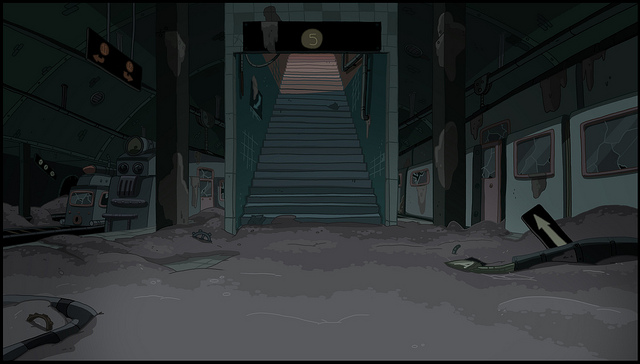 The Cloaked Quarrel, the Stranger, Erwin72, and Empty Spoon tell DarkStorm, Thunderbird, Merlin, and newcomer Phantasm about how they learned of rumors of a criminal mastermind plotting a three-stage attack on their city.

Erwin72 and Thunderbird go back to the secret metahuman prison beneath Hamilton’s Korean War Memorial downtown to try to track Inferna and Maxwell’s Demon, who escaped. Inferna’s molten footprints fade after several steps, suggesting that she shifted back to human form.

The Cloaked Quarrel texts Conchita Melendez, a blogger following the vigilante community. She tells him that Maxwell’s Demon was a member of the “Seventh Legion,” a previous band of colorful characters. The demon apparently wore a glowing yellow gargoyle costume and was also known as “Anomaly S48,” with the power of “quantum manipulation.”

Scowronski also says that the Stevens Inneman Refractory Co. (SIRC) had a false alarm a few years ago, but its building in the Fairmont neighborhood has had no other incidents.

The Stranger explains that a hatch in a tunnel near the “Fortress of Fortitude” led to a SIRC financial center that strangely lists only one employee. Harvey Thorne is a 30-year veteran who has an address in Kings Gate. Secretary Abigail Williams calls Kyle, who posed as a real estate developer, to move up his appointment with Thorne to 8:00 a.m. the next morning.

The Eighth Legion splits into three squads. DarkStorm, the Cloaked Quarrel, Empty Spoon, and one of Erwin’s duplicates drive to the prison to interrogate “The Colonel.” The Stranger, Thunderbird, and another Erwin go to the South Market to shake down criminals to find out more about the mastermind.

Merlin, Phantasm, and yet another parallel Erwin go to Sharp Harbor to visit three old ships said to be involved in one of the meticulous but insane schemes. The vessels are the U.S.S. Superior, a frigate from the War of 1812; the Icefish (SS-367), a World War II Balao-class submarine; and the Bullock (AK-165), a WWII Alanosa-class cargo vessel. The last ship also served in the Turkish merchant marine, was renamed the S.S. Edime, and was refurbished by tobacco firm D.J. Sharif.

At the Vaughn jail in suburban Smyrna, Del., the Cloaked Quarrel talks with warden Richard Gladstone, who is grudgingly grateful for heroic help stopping the recent breakout attempt. The Cloaked Quarrel manages to resist the temptation to taunt personal nemesis Palmetto.

DarkStorm questions Chesnokov and pretends to be a sympathetic super-soldier, at least until the Colonel sees Empty Spoon looking into the holding cell.

At South Market, the Stranger pulls his revolver on a local drug dealer. He pulls him into an alley, then into a pocket of darkness. Thunderbird shifts to avian form to follow, even as startled bystanders record the incident with their smartphones.

At Sharp Harbor, Merlin and Erwin take a tour of the three antique warships, while Phantasm slips away from the group to explore the Edime’s cargo hold. She finds five stripped-down video game cabinets and vending machines that dispense Devil’s Head candy.

Col. Cheznokov tells DarkStorm that Empty Spoon fought well and that his newest boss pays generously. The mercenary declines DarkStorm’s counteroffer and asks for the time, confident that he’ll soon be released.

The Stranger dangles the druggie, who says that a flash mob is planned for the Ramseir Museum of Natural History, the site of previous misadventures. As the three teams compare notes, word comes over the police scanner of mass trauma at the museum.

The Eighth Legionnaires race to the scene, where several people appear to be suffering seizures and are bleeding from their mouths. Thunderbird smells tomatoes and guesses that these pranksters are the flash mob. Phantasm projects an avatar and talks with the police, while Empty Spoon quickly searches the museum.

From the renovated glass dome, the martial artist can see people gathering around a Tyrannosaurus Rex and chanting. The late Erichtho (a.k.a. Anna Lucia Schizzitano) once animated that skeleton during an attempted heist of a jade dagger. The remaining flash mobbers disperse.

However, another alarm has gone off at the Baylus Museum of Science and Technology, and the police radio says those guarding the 1,200 inmates at the Vaughn facility are again in danger. DarkStorm takes Thunderbird, Empty Spoon, and an Erwin to the prison.

The Cloaked Quarrel takes the Stranger, Merlin, Phantasm, and another Erwin to the Baylus Museum, and yet another version of Erwin heads back to Sharp Harbor to make sure the ships are secure.

Another helicopter sits in the prison yard, this time a larger military model. In avian form, Thunderbird unleashes a sonic scream and pecks at the cockpit, scaring the pilots.

Speedster Empty Spoon runs into Inferna, who sends fiery blasts at him and armored DarkStorm. Erwin leaps to catch up, and gunslinger Stranger’s shadowy steed Gabriel tries to trample the villainess.

DarkStorm draws his shotgun, but neither his bullets nor Empty Spoon’s air control affect Inferna. She gets away, and DarkStorm is surprised to find that both guards and prisoners appear to have died, bleeding from the mouth like the flash mob foreshadowed. Thunderbird finds a remote detonation device in the helicopter, more evidence of a diabolical plan.

Erwin suspects a Rudolph-series replicant, whose precognition was used to enforce the law in his home dimension. DarkStorm and Thunderbird wait for more state troopers to arrive, while Empty Spoon rides the winds to join the Erwin at the docks.

Meanwhile, at the Baylus Museum, sniper Cloaked Quarrel and company see Jeanne Baylus talking to police. She explains that “Pixels,” a special exhibit of 1980s video game consoles, has been robbed.

Phantasm notices a dazzle disc on the ground and recognizes it as a souvenir from Flashbang, a former colleague in the “Technoluminati.” Illusionist Phantasm tells her new companions that the group probably conducted the heist and includes Flashbang, dark force manipulator Blackout, reflective speedster Ricochet, and power drainer Mundane.

Wizard Merlin and duplicate Erwin examine the captions in the exhibit curated by Ernest Gutner. They describe the Hamilton Gaming Co., before eventually being sold to D.J. Sharrif. The lead programmer was one Frank Zorn, who created several best-selling video games from 1980 to 1984 before disappearing.

Strangely, characters in those games, such as “The Devil’s Den,” seem to predict the Eighth Legionnaires! Over the radio, the Stranger speculates that somehow Harvey Thorne and Frank Zorn are the same person, and Erwin says that the as-yet-unidentified mastermind might be able to see the future.

Merlin casts a spell and determines that the game parts have been taken to Sharp Harbor. The Stranger, Merlin, and Empty Spoon argue over where to go next in trying to thwart the hidden mastermind’s plans.

The Erwin incarnation there reports that he sees the Technoluminati leaving the S.S. Edime and boarding the Icefish. The entire Eighth Legion converges on the ships.

Erwin notices the Technoluminati checking their watches. The Cloaked Quarrel and Empty Spoon head toward the sub. However, Maxwell’s Demon appears and begins to phase out with the cargo vessel.

DarkStorm, the Stranger, Erwin72, and Empty Spoon jump onto the Edime as it vanishes, leaving the Cloaked Quarrel, Thunderbird, Merlin, and Phantasm with the Technoluminati on the Icefish….